(CHICAGO, IL) The Auditorium Theatre Auxiliary Board, a dedicated group of young professionals devoted to raising awareness and generating support for the Auditorium Theatre, hosted its annual Devil’s Ball fundraiser right on the theatre’s historic stage on June 14, 2019. The event raised more than $45,000, with all proceeds benefiting the continued restoration and preservation of the National Historic Landmark theatre. 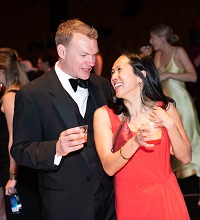 In keeping with the 1893 World’s Fair theme of the event, guests enjoyed internationally-themed cuisine, provided by Food for Thought and Russian Tea Time; sipped specialty cocktails with spirits provided by CH Distillery; and danced under the golden glow of the Auditorium Theatre’s arches in this unique event hosted on stage. Mini-tours of the 130-year-old theatre gave guests an intimate look at the Auditorium’s world-renowned architecture and design, which played a large role in securing the World’s Fair for Chicago when it was unveiled in 1889. Magician Benjamin Barnes roamed the stage, performing close-up tricks for entranced attendees, and a duo of belly dancers from Safire Belly Dancers surprised the crowd with a mesmerizing performance. 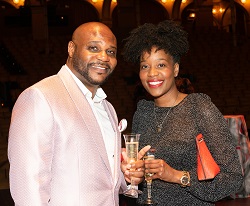 A silent auction was open throughout the evening, featuring items including signed Cubs and White Sox baseballs, a trip to Memphis with tickets to Elvis Presley’s Graceland and a stay at the Peabody Hotel, a bed-and-breakfast stay and VIP wine tasting at Traverse City’s Chateau Chantal, and brewery and distillery tours. Guests also participated in a wine pull, purchasing $15 tickets to take home a bottle of wine valued up to $85.